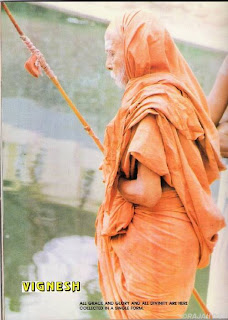 
That is the ‘rasa’, the flavour, the juice, the essence. Who is giving that ‘rasa’? It is the ambaal. Her divine feet is there in the reflection of the moon as the Guru.s Grace. That is where indeed the nectar flows from. That it flows from the moon is only a way of saying.

The one who receives and realises the flow of that nectar-rasa is the jIva. But the advaita bhAvanA (attitude) that She is Herself the ‘rasa’ and She is also the ‘rasAsvAda’, the taster of the ‘rasa’ -  this feeling will also be there.