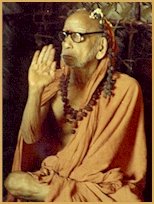 In addition there is the Yantra-form for each devatA. The form has lines, triangles, enclosures, circular or otherwise; these are not just geometrical figures. Each of them has a meaning and significance. They have extraordinary power. Each YantraM is set to absorb and bring into focus the paramAtmA in the form of that devatA.

In addition to the repeated mental recitation of the mantra, one does pUja to the YantraM also. Within the triangles of the Yantras and other enclosures, the seedsyllables (bIja-aksharas) corresponding to the mantra pertaining to the devata would be inscribed. The very devatA that is the life of an idol with arms and feet is also considered to be brought alive in the corresponding YantraM, In fact the YantraM is even more comprehensive; for it includes the native residence of the devatA and all its accessory deities within itself.