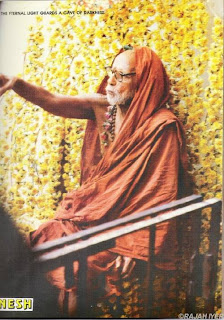 
In fact he gets the fluency and the power of speech which only great writers have. And the shloka uses a specific word here: ‘mahatAm bhangi rucibhiH’ . The word ‘ruci’ means ‘taste’, or ‘flavour’. ‘Taste’ certainly has an association with the tongue and the food which it ‘tastes’. But the shloka adds on to this the ‘flavour’ by the nose also. The food ‘taste’ was indicated by the last line of shloka (#15) where it was said that the speech prompted by ambaaL has the taste of ‘honey, milk and grapes’.  Now in this shloka that speech is likened to a profound flavour, not of any ordinary one, but of that which emanates from the lotus face of Her who is the single vAgdevI integrating all the eight vAgdevIs!

Not only that. We can infer from this that it is not simply the speech that emanates through the poetry of the devotee has the divine flavour; the people who read and recite that poetry would also get that divine flavour.!!