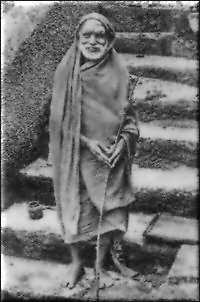 The Acharya (Adi Sankara) has, in his bhashyas, referred to the one primordial principle and power (Paramatma and Parasakthi) conducting and controlling the Jagat as NARAYANA.

Our country is a country where threadbare analysis of and enquiry into the facts of life (tatva vichara) has been taken to their end and documented in Sastras which include Vedanta, Mimamsa, Sankhya, Nyaya, etc.

The Acharya wrote bashyas mainly to help those involved in the devoted study of sastras. Though it be so.Even though this country is well known for "tatwa vichara", it is even more well known (good name and bad name both) for giving us a large number of Gods (deities).

Instead of doing so, and in order that the treatment may be appealing to the community which is used to relating itself to God with Form, he had thought it necessary to refer to the Absolute at several places by a Name. The question arises about which Name to choose.