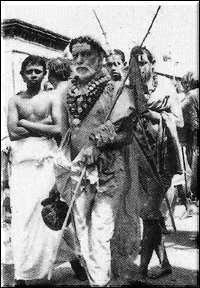 Water, which is colourless, appears black when passing over black soil, and red when passing over red soil. It is like that. So, for the benefit of people who take to Bhakti marga for self-fulfillment, he made stuthis to different deities to suit different preferences.

When he made such stotras, he became, as it were, the Bhakta of such deities. In that way, when he made stotras on Siva, he could become a Siva Bhakta and not remain a Siva Avatara.

It would be self – praise only if, remaining a Siva Avatara, he sang in praise of Siva. If he became a Bhatka of Siva and sang his praise, did it not become permissible to him to sing his praise as much as he wanted ?

It may occur to some that the Acharya gave central place to Siva, as Chandramouleeswara, in his Mutts and made the other deities adjuncts.

The Mutts are meant for all and so it may be asked why he gave central place to Siva in the Mutts. The answer is that the Acharya did not plan that this should be so.