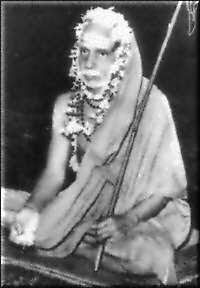 Sri Ekamram (had been a personal attendant to Mahaswamigal for nearly three decades) said that once when Mahaswamigal had camped in Pandaripuram, there lived in this holy kshetra a young boy who used to do severe sadhana.

He used to visit Mahaswamigal every day. He used to have ‘jadai’ (unkempt hair) and wore religious marks on his body. He repeatedly sought sanyaasa from Mahaswamigal.But Mahaswamigal’s only response to all his pleadings was silence.

Whereas, there was this man who was doing ‘Bhiksha Kainkarya’ (cooking and serving food) to Mahaswamigal and who was not in the least interested in sanyasa. But Mahaswamigal coaxed him into it!

People see and judge a person outwardly whereas a Mahaatma ‘sees’ through him and knows him inside out.

After some years it was learnt through newspapers that this boy who had sought sanyasa from Mahaswamigal, had married a foreign lady!

With our limited mind we cannot see within. But a Mahaatma’s viewpoint (‘drishti’) is always right.
Posted at 9:45 AM