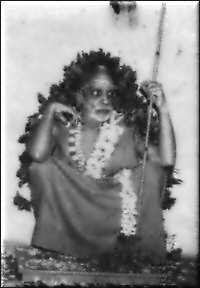 The ‘kAmayamAnaH’ thinks that karma is everything and keeps on performing his karmas, then he reaps their fruits in the other world; when that gets exhausted he is born again here and revolves in the same rut of karma. On the other hand the ‘akAmayamana’, that is, the one who has vairAgyaM, is, the Upanishad goes on, ‘akAma’, ‘nishkAma’ and ‘AptakAma’ . When he throws off his desires he is ‘akAma’ (desireless).

Instead of his making efforts to get rid of desires, when they themselves run away from him, he is ‘nishkAma’ (devoid of desires). Then he becomes an ‘AptakAma’ – one who has attained his desires! When the Upanishad speaks like this, one gets the doubt: ‘How does an ‘akAmayamAna’ (one who is not subject to desires) have desires? What does he desire to obtain?’. But this is explained by the next epithet which the Upanishad uses in the series: ‘akAma’, ‘nishkAma’, ‘AptakAma’ and ‘AtmakAma’.

‘AtmakAma’ is one who has desire for the Atman only. When he gets that he becomes an ‘AptakAma’ – he who has attained his desire. Thus the one who has vairAgyaM becomes an akAma, nishkAma, AptakAma and AtmakAma; when he dies his jIva does not go to any other world. The Upanishad says that he is Brahman even while living and when the body falls, he is still immersed in Brahman (Br. U. IV – 4 – 6) .

It is the state of desirelessness, that is, vairAgyaM, that has been said to be so qualified for Brahman-experience.If one is not just a ‘shrotriya’ – a scholar with deep understanding of the vedas – but is also an ‘akAmahata’ , that is, one who is not destroyed by desire, he is the one who rises step by step, each times a hundredfold, in the bliss that starts from that of a ruler of this world to the ultimate bliss of Brahman, says Taittiriyopanishad (II – 8) and also (though slightly in a different way) Br.U. IV – 3 – 33. Thus here also, it is the destruction of desire, that is, being with vairAgyaM, is the prime qualification.

In the Gita also Bhagavan has emphasized as important, only the two things: “Practice and Dispassion” *abhyAsaM* and *vairAgyaM*. To still the truant mind in one place persistent efforts have to be made. Persistent effort is what ‘practice’ means. For stilling the mind the other important requisite is Dispassion (vairAgyaM), says He.