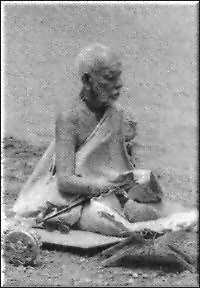 Only when we develop a disgust do we stay away from those objects which generate a bondage of MAyA.

An attitude of “Leave it alone; let it be” in this matter will not be a sAtvic attitude. It is only foolishness. “ Not being afraid of what has to be feared is ignorance” says Tiruvalluvar. *anjuvathu anjAmai pethamai*. His Tirukkural teaches us to be courageous men not to be afraid of anything.

Even then before one gets that courage, we should not bungle by our foolishness; so he says: “In this world one should certainly avoid those things of which we should be legitimately afraid; otherwise we shall only be foolish”. Ignorance and foolishness are not far apart.

Our Acharya who taught us to love everything – the same Acharya teaches us, to develop, in the early stages of spiritual ascent, a disgust towards those things which are in the nature of an obstacle to the growth of spirituality. He gives a really telling analogy that actually may hurt us deep.

It is an example which itself can be disgusting. The same example is given by him in three books, ‘Bala-bodha-sangrahaM’, ‘aparokshAnubhUti’ and ‘sarva-vedanta-siddhanta-sara-sangrahaM’.

In the first two, he says *yathaiva kAkavishhTAyAM* and in the third, he says: *kAkasya vishhTAvat asahya-buddhiH*. The analogy is to the leavings of a crow. Just as we have a natural disgust for the leavings of a crow, so also there should be a disgust towards things of sensual experience – this is the purpose of the analogy.

Suppose we are having a picnic under a tree in its shade and suddenly from the branches of the tree a crow’s leavings fall on your plate full of excellent food. That very moment we move away from the food in total disgust, don’t we? Even if the crow is hushed away and we sit at another plate of good food, our mood would have been upset and the good food refuses to go in! That kind of disgust is what should be developed in objects of sensual enjoyment -- that is vairaagyaM, says the Acharya.

When such a disgust becomes really intense, even a picnic will appear only as disgusting as the leavings of a crow! One will start thinking that there is no need for a picnic when, as the Acharya has said, it is only necessary to calm the disease of hunger by eating what one gets by BikshhA (ritual begging).