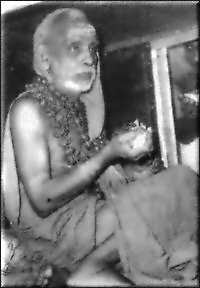 Mahaswamigal took sanyasa at the young age of 12. He came to the Peeta at this tender age.

He was so in all aspects – as a Sanyasi, as a Guru, as a Vidwan and as a Tapasvi. He possessed highly exceptional qualities that were beyond description. He was an adept in mantra Shastras.

Once a boy came to Mahaswamigal in deep anguish. He was not wealthy. He had none to call his own except a sister whom he had married off. But now she was mentally deranged and her in-laws were pressuring him to take her back. He had no permanent earning or place of stay, and so was perturbed about bringing his sister back. She used to behave abnormally.

Mahaswamigal asked the boy to bring the sister while He performed Chandramouleeswara puja. Mahaswamigal said that after the puja He would do japa with the sandal paste (‘chandan’) which He would splash on her. And she will react violently and run to a mango tree.

Mahaswamigal instructed, “No one should follow her or stop her”. She was very restless when brought in and would not stand there. Mahaswamigal did as He had said. She ran out and hit against a tree and fell. She then became all right as the ‘brahma raakshas’ that had caught hold of her had left her!