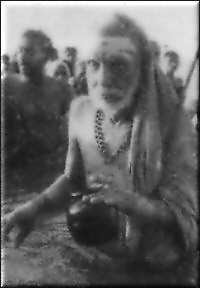 It is not as if we are talking only about the pleasures that one enjoys through this human body in this world. Our distaste has to be even in those enjoyments one hopes to experience in the world of BrahmA. The jugupsA has to extend that far. *dehAdi brahma-paryante*.

The Absolute Truth that is formless and attributeless, called Brahman – that is the only thing to be aimed. The enjoyments that may be offered by The Lord whose form is Creator BrahmA, in his world, -- all these have to discarded as valueless.

In SAdhanA-chatushhTayaM, when the Acharya mentions vairaagyaM he actually refers to it with a long qualifying adjective as *ihAmutrArtha-bhoga-virAgaM* or *ihAmutra-phala-bhoga-virAgaM*. (Brahma-sutra- bhashya: I. 1-1; Vivekachudamani: 19)

‘iha’ + ‘amutra’ is ‘ihAmutra’. ‘iha’ means this world we live in now. ‘amutra’ means the pitR loka or indra loka etc. which are not ‘here’ or ‘near’ but ‘far, somewhere’. The world of the divines where several of the devas live as well as the farthest ‘brahma loka’ where Brahma lives – all of these are included in the ‘amutra’. Tiruvalluvar says: “Those with no Money miss this world; those with no Grace miss the other world” – ‘this world’ here is ‘iha’ and ‘the other world’ here is ‘amutra’.
The experiences in that brahma loka are also not the spiritual experiences; nor are the bliss of the Brahma-loka the Bliss of the Atman. The pleasure of Brahma-loka also vanishes during dissolution at the end of the kalpa. It is not eternal or permanent like the Bliss of the Atman.

Further, even there one gets only the pleasure that keeps the distinction between jIvAtmA and paramAtma and so it won’t be even an iota of the great Bliss of identification of the two. Thus the ‘virAga’ is the ‘vairAgya’ in the experience (‘bhoga’) of the objects (‘artha’) that one gets in ‘iha’ or ‘amutra’. That is why it is ‘ihAmutrArtha-bhoga-virAgaM’.

When we talk of this in another way as ‘vairAgya’ in the experience of the fruits of this world or the other world, he calls it ‘ihAmutra-phala-bhoga-virAgaM’. ‘artha’ is an object; ‘phala’ is that which we get from the object.

Those who have ‘vairAgya’ are known as *vIta-rAga*’s. The ‘vAtApi GanapatiM’ song has *vIta-rAginaM vinata-yoginaM*. In Mundakopanishad (III – 2 - 5), the Rishis are said to have obtained contentment in their Enlightenment, to have been established in the Atman, to be ‘vIta-rAga’s (free from attachment) and finally are described as ‘prashAnta’ – those who are fully composed.