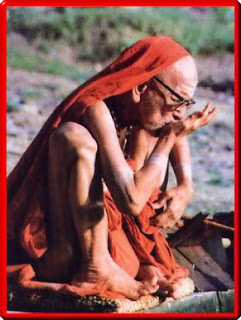 (Continued...)
Even if millions of people do not go the right way what is of significance is that one of them will see the difference between good and bad and make the total surrender to Her and get Her shower of Grace for
him to see that he (the jIva) and the Ultimate are one. Not all the seeds of the fruits of a tree grow into a full tree. In the whole world of living beings even if one in a million achieves that Infinite fullness of Man the purpose of Creation is fulfilled. That  probably is ambaalís idea of Creation.

But again, those who do not so achieve the Fullness are not to be considered wasted or damned. There is no eternal damnation in our scriptures.  Acharya Madhva propagated that idea. Maybe he thought that at least the dread and fear of eternal damnation would motivate people into reforming themselves to be good. Even an extremely sinful person has a way of ultimate redemption  -- that is the creed of our
religion.