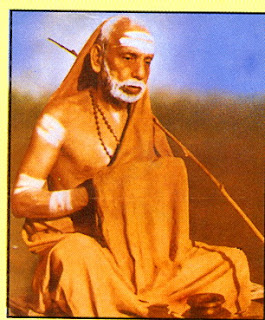 (Continued...)
So the same (obverse) power which originates ‘kAma’ in human beings, has also the (reverse) power to
say, in respect of certain blessed individuals,  to that ‘kAma’, ‘Don’t go near such and such persons’ !

So Manmatha, the God of all sensualities, who overpowers us by the power which he got from ambaal, has however to obey Her when She says: ‘Thus far and no further’.  The shlokas 5 and 6 which talk of the
power of Manmatha has this implication for the devotees of  ambaal, though the  shlokas do not say so; they only talk of the obverse of the coin, not its reverse !

And that, the unsaid reverse, is  the significance of those two  shlokas, especially for those of us who can surrender to Her through recitation of these  shlokas. Her  leelA is: From advaita through ‘desire’ to dvaita; and then, ultimately,  to advaita through Her Grace and Compassion!