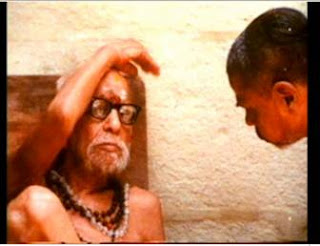 (Continued...)
The former means: ‘(She who has) the bow of sugarcane, the sugarcane being the figuration of the mind’. The latter name means: ‘(She who has) the five arrows that are the figurations of the five tanmAtras (= subtle principles behind the senses)’.
The same sugarcane bow, which in Manmathaís hands, draws man downward into sensuality, in Her hands, leads us upward by producing the ‘desire’  for  mokshha. The same five arrows of flowers, which in Manmathaís hands, lead man’s five senses outward toward sense objects, in ambaal’s hands, makes us  desire, to see Her divine form, to hear the melody of  music in devotion to Her, to taste the sweetness of the nectar flowing from Her Grace, to smell the fragrance of the flowers that adorned Her, and to feel the touch of Her lotus feet.