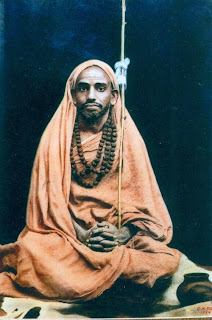 So what the poets do is to imagine newer and newer examples with great effort. This effort of imagination by the poet is denoted by the word ‘kalpante’ in the shloka. ‘kalpanA’ is imagination. They only imagine an example. They are not able to arrive at the real thing, is what the shloka says. The fact they are not able to do it, is gracefully hinted at by the shloka in the words ‘kathamapi kalpant’.

The Yantra-form of the Goddess has been outlined with precision. But Her physical form eludes imagination. Attempts by even the great Brahma and others to find suitable examples have only failed.