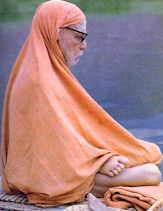 There are devotees of Shiva who seek that sAyujya padavI in their unquenchable thirst for becoming one with the Lord. In their case the sAyujyam is an end in itself. On the other hand, the divine damsels (go back to shloka #12) who are seeking that sAyujya status with Lord Shiva do not seek it as an end, but as a means to be able to see the beauty of the Supreme Goddess.

It is an irony that in the hands of these damsels even the greatest goal (sAdhyam) of shiva-sAyujya status has become a sAdhanA (means) for the sadhyam (that is, that which is sought, and therefore, a further goal), the darshan of the fullest beauty of ambaal!