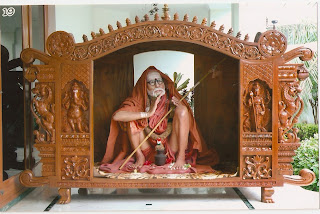 It is to be noted that this shloka, which elevates the beauty (soundaryam) of ambaal to its apex, is actually in the midst of the first part, that is Ananda-lahari. Another shloka (#14) describes ambaal as the personification of Time (kAlam).There are six seasons in a year. These 360 days of the year are the 360 rays of light emanating from the infinite Light of Shakti. Each of the Chakras represents one of these seasons and there are as many rays there as there are days in the corresponding season.

For instance, in the mUlAdhAra Chakra, there are fifty-six rays, corresponding to the fifty six days of vasanta-ritu (the spring season).