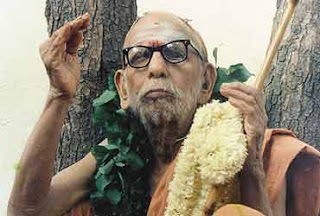 He lives in that continuous identification with the Absolute. To such a one, says the Acharya (in #30), even the Cosmic Fire of Dissolution is just a nIrAjana (waving of Lights) only. Because it is so to the Mother Goddess. And it is therefore also so to one who has continually identified with Her.

The third ‘nIrAjana’ comes in the very last shloka where the Acharya offers this Soundaryalahari itself as a waving of Lights to that Sun-like Light, that is the ambaa Herself in Her capacity as the Source of all Speech and Learning. The words of the Soundaryalahari are words which emanated from Her. So Her own words form the nIrAjana to Her.