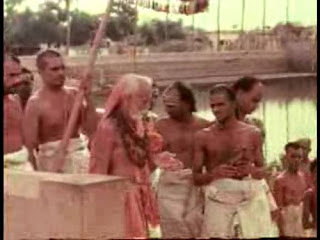 The three divinities mentioned here are referred to as ‘triguNajanitAnAM’, meaning, ‘those who have their origins in Thy three guNas, satva, rajas and tamas’. Rudra is the only one who has the tamas as the
source. Since he is said to ‘be born’ (janitAnAM) of tamas, it is tantamount to saying that he is ‘born’ of Her and therefore He is Her offspring.

And this justifies his falling at Her feet. Since the topic here is to say that the pUjA of the Divine Triad (born of Her guNas) is actually embedded (included, implied) in the pUjA of Mother Goddess, the deity Rudra, who is generally equated with Shiva, has to be included here.