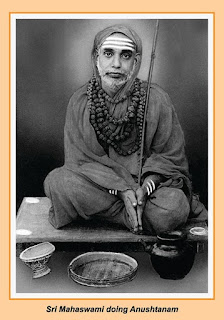 It is true that even in the beginning, everything happens by God’s Grace. But during those times the JivAtmA was engaged in self-purification and for that to happen well God’s Grace helped.

But now the purification task has reasonably progressed. Now the purified antaH-karaNa (inner organ) has to reach step by step the state of experience.

‘Reach’ is really not the right thing; unusually instead of ‘reaching’, now it is ‘giving’.

As Manickavachagar said, it is a smart trading. One gives up the JIva-bhAva and receives the ‘shiva-sthiti’ (the state of being the Absolute).

But even this is only true in a poetic sense or in the sense of bhakti.

In reality, there is no JIva who receives the ‘Shiva’. JIva is gone but Shiva remains!

Bhakti has been prescribed for reaching this maturity of the vanishing of the ego.

The Acharya says, as it were, “I have prescribed SAdhanA so that you may acquire the wealth of the sextad (ShamAdi sampat) starting with Shama, the wealth of Dispassion, the wealth of Discrimination, etc. You have acquired them all. Hereafter you must learn to empty yourself. That is why Bhakti has been prescribed.”