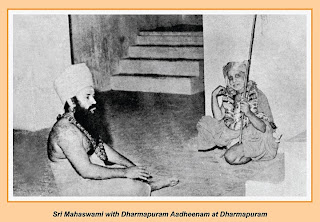 Desirous of being totally consumed and dissolved by it, one sacrifices himself to it.

That is what is termed here as ‘higher-grade’ bhakti.

When one begins SAdhanA we keep on using the word ‘I’ in our thoughts: “I should get Release. I should reach Brahman. I should become Brahman”.

It is impossible to sacrifice that ‘I’ at that stage itself.

Many westerners who are strong in their intellect and courage are fearful of the thought of sacrificing the JIvahood – the feeling of an individual self – and they say: “What? Am I to sacrifice my individuality?”.

Even when one is not afraid from the very beginning itself, the JIva-hood does not disappear then and there.