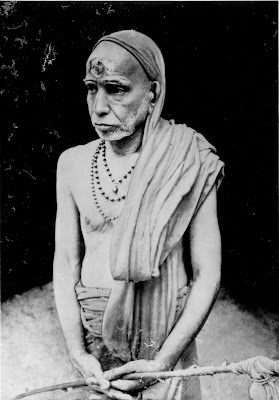 Swami (in Sanskrit) or Udamai (in Tamil) refers to ownership. Udaiyavar or Swami means one who owns everything. In Vaishnava (followers of Vishnu) parlance, God is known as Swami or Udaiyavar. Originally, Saivaites (followers of Siva) also referred to deities as Kapaaleeswaramudaiyar etc. As Guru and Swami are considered one and the same, Sri Ramaanujaa (founder of Visishtaadvaita philosophy) goes by the title of Udaiyavar himself.

Physically humans have some energy and so are able to lift weight up to a limited extent. Cattle lift heavier weight than humans; camels and elephants can lift even heavier weights. In intelligence too, worms, ants, cattle and humans display progressively higher levels. Pursuing this line of discussion, one would conclude that there must be a basic entity with the fullest physical and intellectual prowess. That entity is named as Swami (God).

Nature displays pair of opposites in the energy too. Samples are: severe winter – severe summer, night – day, soft flower – sharp thorn, sweet – bitter, love – hate etc. Thus each entity in nature has another different entity with the opposite qualities. To continue the logic, there has to be some thing different from human mind. What is the nature of the human mind? It is to be always thinking immersed in likes and dislikes, to be discontented always without ever being satisfied. Conversely there has to be some thing without any motion, perpetually calm, peaceful and contended. That some thing is named as Swami (God).

In nature there is continuous change. A few changes are visible to us. Though we consider the mountain and the ocean as unchanging, these too keep on changing in the course of time. In nature nothing is permanent. In opposition to this state, there must be an entity which is unchanging or permanent. That entity is Swami (God).

In nature again, one entity leads step by step to another entity. In the same nature, all entities have changes. Both these happenings point to a divine principle. These lessons are conveyed by Sridevi (Goddess).

The question arises why one should worship the divine. What is our condition? We are always with endless wants. Paramatma (God) remains without any wants whatsoever.