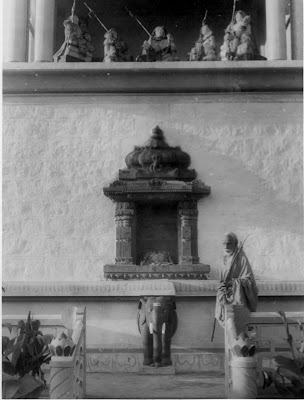 
We now roam about calling something as “I”, “I”. In reality this “I” belongs to Him alone. If this awareness is mentally and intuitively attained, then our roaming about will cease. If we realize that there is no case for personal likes and dislikes, then there will be no roaming about. There will only be complete peace and quiet.

The term Swami itself has been formed to emphasise that we have no right to anything on our own; we are His property to be used at His will. Such a realization is Saranagati (complete surrender) that is the ultimate ideal of Bhakti (devotion).
There is another justification for practicing Bhakti (devotion). There is no pleasure in living without love. It is the gist of experience that there is incomparable pleasure in love. But the person we love will separate from us one day or we will separate from him. Then the love instead of being source of pleasure becomes the cause of grief. Isvara (God) is the only permanent entity, which will not go away or separate from us. If we place our love on Him that love will give us pleasure eternally. On maturing this love leads to the awareness that He is one and all. This will not have the basis that love towards one, means hate towards another. Since He is in all beings, we shall have same love without any discrimination towards all. Thus Bhakti (devotion) helps us to avoid being loveless and waste our lives.

There is no need to try directly for liberation, giving up the practice of Bhakti. The constant practice of the latter itself leads to liberation. Hence it is sufficient to pray not for liberation as such but for the gift of Bhakti (devotion). As the Tamil poet Gopalakrishna Bharati says, practicing Bhakti gets one Moksha (liberation).
Sri Sankara Bhagavatpada has composed Stotras (prayers) wherein all deities are looked upon as the embodiment itself of Brahmam (Supreme God). He has also explained the characteristics of Bhakti (devotion) beautifully in Sivaananda-lahari. He has cited five apt illustrations.

Just as: the seed of azhinjil (or ankola) tree merges with the parent tree; the iron needle is attracted towards the magnet; the devoted wife is immersed in thoughts about her husband; the creeper grows around the tree; and the river merges with the ocean: Bhakti is the constant immersion of the mind in the thoughts about the lotus feet of Pasupathi (or Siva).

It is stated that there is a tree called Eru Azhinjil. Its fruit ripens, falls on the ground and breaks open. Then the seeds from the fruit, attracted as it were by a sort of force of gravity, move gradually and attach themselves to the parent tree. Thereafter it is said that these seeds form part of the latter and disappear from sight. We, who have become separated from Bhagwan (God) should similarly gravitate towards Him; and ultimately become one with Him.