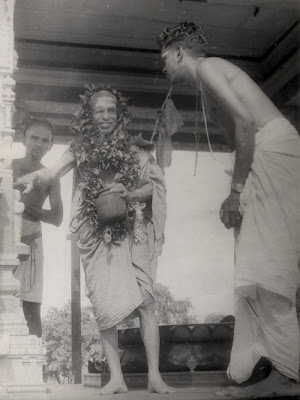 
The next example is that of the iron needle moving quickly towards, and sticking with the magnet. The needle stuck to the magnet, develops magnetism itself and starts attracting other pieces of iron. By this example Sri Bhagavatpada illustrates that the Bhakta (devotee) will also develop the qualities and powers of Bhagwan (God).

Next comes the example of the devoted wife. A devoted wife’s thoughts, speech, actions all will be about her husband. Likewise our mind, speech and actions should be about Bhagwan (God). Sri Bhagavatpada terms the husband as vibhu (in Sanskrit). When applied to Bhagwan (God) this term means omniscient. By this Sri Bhagavatpada indicates that we should regard Bhagwan (God), not as one confined to a particular location, but as one who is omni-present and all pervading.

The example of the creeper comes next. If we separate the entwining creeper from its tree, it wavers in the wind but ultimately entwines itself around the supporting tree. This illustrates that we should not swerve from our ideal, ignoring the many distractions that take our mind away from the thoughts of Bhagwan (God).

Last is the example of the river and the ocean. This is the height of advaita (non-duality) philosophy. Water from the ocean evaporates, forms into clouds and falling back into earth as rain, becomes river. The two are not distinct from each other. Whichever may be the mountain top from where it originated, the river flows in continuously (- and it seems tirelessly -) merges with the ocean; and losing its individual name and shape, becomes the ocean itself. The ocean comes forward and greets the river! This is the reason why the waters of the river taste brackish some distance ahead of the estuary. Similarly if we have real devotion, Bhagwan who is like an ocean of mercy, will come forward, bless us and make us His own.

One may practice devotion at first for material benefits or higher social status etc. But, due to His extraordinary qualities, we shall gradually attain the maturity of devotion to Bhagwan for its own sake. In the end we shall merge into the nirguna (without the attributes of qualities) Brahmam (Supreme God) and become one with Him.

For a good life on earth or for personal realization of the philosophies of dwaita (duality), visishtaadvaita or advaita (non-duality) – for whatever goal, Bhakti (devotion) becomes essential. Of all the routes to attain Moksha (liberation), Bhakti is the best, says Sri Bhagavatpada. He follows with the statement that Bhakti is defined as the intuitive realization of the real nature of Atman (Soul).