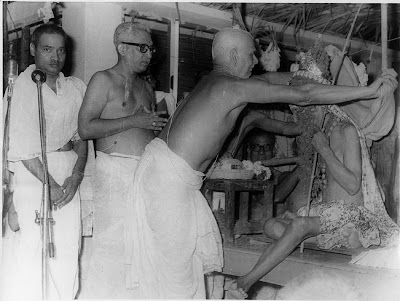 An ‘atyAshrami’ is one who is either in the SannyAsa-Ashrama or one who is even higher than that, namely one who is a jnAni whom no ShAstraic injunctions touch.

The Svetasvataropanishad (VI-21) seems to be teaching Brahma VidyA only to such atyAshramis. There is an Upanishad called Kaivalyopanishad. The Acharya used to quote from it often.

In the beginning of that Upanishad it says the atyAsharami goes to a solitary place, sits in a straight Asana, controls his senses and mind and meditates on the Shiva svarUpa, his Atman.