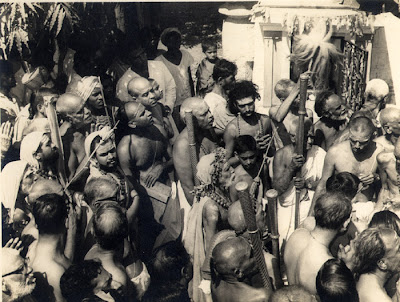 The svadharma that the Vedas talk about is the division into the varNas and the allocation of duties to each.

So the nishThA that comes from the authority of the Vedas means the nishTA in the discharge of all karmic obligation. Thus one should do one’s karma completely.

That is what gives purification of mind. And then follows Atma-jnAna as well as the end of all bondage.
When one does karmas according to the prescriptions of the Vedas, first it drains all the dirt from the body by those sheer karmas. Not only that.

Simultaneously the dirt of the mind is also rinsed and wrung out. Afterwards one stops doing his karma but now goes into the karma of the mind by doing dhyAna.

And still later even that dhyAna stops and he reaches the stage of jnAna.

So the sequence is first dharma nishThA, then karma-nishThA and finally jnAna-nishThA.