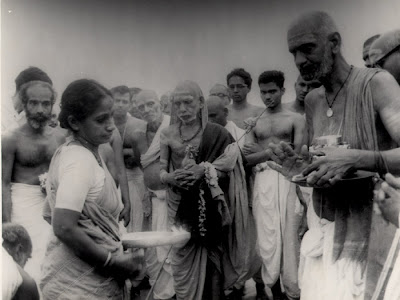 Nothing should be missed here. One should not move forward without having done the earlier one. Nor should one have anything to do with the earlier one once he has moved forward.

When a cloth is washed, we do mix a lot of water and wring the cloth for the dirt to go. But once the dirt is gone no more wringing is necessary.

If we keep wringing the cloth after that it will only damage the cloth. What is necessary now is to dry it up in air. This is the going to the jnAna path!

It is not just a total end of the cloth. The Jiva cloth is there no more, but now it has become a golden sheet of Brahman.

The nishThA in the Atman that the Jiva was engaged in is not any more the action of the Jiva, the Jiva is not there any more, the Existent Thing (*sad-vastu*) that was in an experiential form in the culmination of the nishThA – that alone remains.

It is the Peace Ultimate, it is the parAyaNaM talked about as the peak state. *nishThA shAntiH parAyaNaM …* says the Vishnu sahasranAmaM.
Posted at 9:45 AM