Today, we are commencing the translation of Periva's discourses on Soundarya Lahari, which has been very aptly translated in to English by Prof VK. 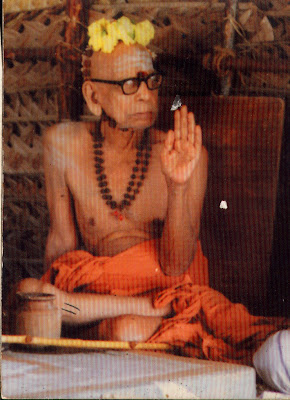 "How could Adi Shankara, who preached the jnAna mArga, have promoted this work (Soundaryalahari) of bhakti? It cannot be his",” say some who profess ‘Philosophy’. But our Acharya was not a professor who isolated philosophy as a separate discipline. Having written very profoundly on advaita and its deepest implications in his several commentaries and the other works of his, he promoted the spiritual pursuit of the common man by writing and talking about the need to follow one’s swadharma by Karma and Bhakti.

His intent was to raise the common man from his own level. For this purpose he went from one pilgrim centre to another all his life and composed hymns after hymns and also established yantras in temples.

The philosophers argue: JnAni says everything is One. But Bhakti can happen only when there is the duality of the devotee and the deity. Therefore, they say, the jnAni can never be a bhakta. These philosophers cannot themselves claim to have the Enlightenment of advaita !

But there have been those who could have so claimed, like the sage Suka, Madhusudana Saraswati or Sadasiva-brahmam. If we carefully study their lives we will know that they had been devotees of God in the fullest sense of the word and have themselves written works of Bhakti.

Even in our own times Ramakrishna Paramahamsa has been a great devotee of Mother Goddess. Ramana Maharishi has done works of devotion on God Arunachalesvara.
(Continued...)
Posted at 9:45 AM