Jnaana itself is Bhakti - Part 3 of 5 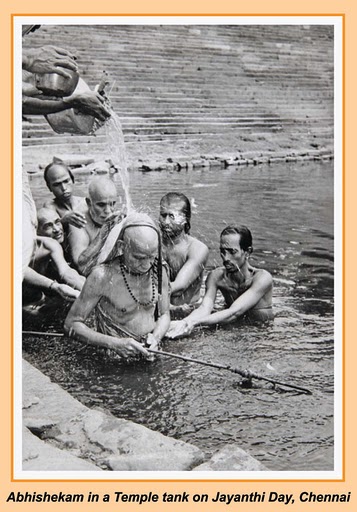 (Continued...)
Nowhere has he said in Bhakti yoga, about revelling in the multifarious qualities of Bhagavan, weeping, laughing, dancing, singing, going into unconscious trance, establishing relationship with God through various moods like, servitude, filial affection, etc. or enjoying the ritual bathing (abhisheka) or decoreating the deity, etc.

The qualities that He enunciates, viz., love and affection to all beings, getting rid of the feelings of ‘I’ and mine, equanimity with respect to happiness and misery, fear and delusion, contentment with whatever one gets and being independent of possession and property – all these qualities are only those of the JnAni!

There is also one shloka which describes devotees:

Those who have turned all their mind toward Me, who have reposed their very lives in Me, who are constantly enlightening each other and talking about Me and for whom that is the satisfaction and that is the delight!
(Continued...)
Posted at 9:45 AM