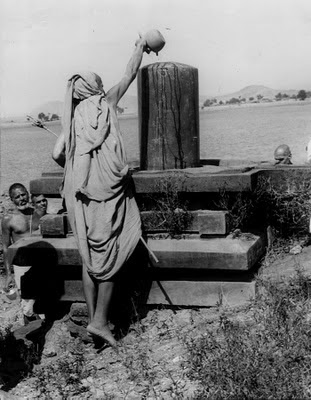 
We with our countless wants have but limited prowess. On the other hand, the want-less God is all-powerful. We are in depths. God is in great heights. Not only is He supreme in prowess and knowledge; He is highest in mercy too. Therefore He lifts us up from our depths and makes us fulfilled. We are deficient. He is the fullest of the full. Only His fullness can fulfill our wants and make us also full. He is such an all-merciful. If we worship Him, He dispels our shortages.

If there is shortage it means something is wanting. If our wants completely disappear, we can become full then and there. God fulfills our wants. He leads us to the satisfaction of fullness where we feel complete lack of wants. Then that supreme height (God) fills our depths; and lifts us who have been in depths and makes us equal to and the same as Himself.

Swami remains Brahmam (action-less God) residing inside human beings; He is also the outside entity Isvara who performs all actions.

Human beings are swimming in the waves of samsara (the world or the constantly repeating cycle of birth and death). Seers are standing in the fields on the other side of the lake. In between is the shore of the lake. Due to its intervention the seer is unable to see the lake. He is not visible to the human beings in the lake. Swami on the other hand is in the shore between the two. Hence the title, Thatasta. He sees the universe as well as the Seer; the latter is bereft of awareness of the world. God is capable of calling the person in the field (the Seer) and instruct him to rescue the sinking man and place him on the shore.

God is fully aware of His omniscience. But He playfully looks upon as distinct (from Him) those persons who consider themselves separate and distinct from Him.

His greatest act is to liberate people from Maya (illusion). That act is known as anugraha (grace or blessing). There is no other path but this Anugraha to attain the state of advaita (non-duality or oneness with God). Soliciting this Anugraha again and again is termed as Bhakti (devotion). Believing God is full of mercy and capable of gracing us we have to pray with extreme sincerity and devotion. This is called Bhakti.