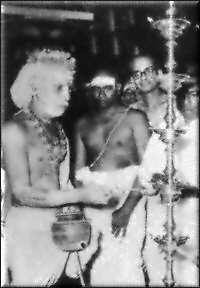 ‘To become Brahman’ is something really great. But the one who wants to win that high prize is so small! Naturally it has to take several several life-times.

Just to conquer another kingdom like his own a king has to make elaborate preparations for war. When that is so, for a small man to win over the kingdom of brahman-realisation, he has to take enormous efforts.

It is the kingdom of the Atman that the JIva is set out to conquer!

From one point of view the whole matter appears simple. We are not aiming for the kingdom of heaven in Vaikuntha or Kailasa which are far away from us. What we are aiming at is to know ourself, to know what is within us.

Just to be what we are is the goal.

There should not be any difficulty here; because we are being asked to be what we are and nothing more. When it is said that way it looks simple. But when we attempt it we come to know there is nothing more difficult than this SAdhanA.

It is like walking on razor’s edge, says the Katha Upanishad. But don’t lose heart, adds the Upanishad. Wake up, there are excellent teachers to guide you. Even if it be razor’s edge you can walk on it and come out successful! Thus the Upanishads speak of the difficulties of the path but also give you the path.

The Guru’s Guru of our Acharya has also talked of these in very formidable terms. “Advaita is the only fearless state. Even great yogis fear to tread that path. It requires that fantastic effort of emptying the waters of the ocean by using blades of grass, soaking them in the water and shaking the water off from the ocean. Only by such unceasing effort can the mind empty itself of all its thoughts and be in the Atman.” [Mandukya Karika: III-39, 41]