Who dispenses the fruits of our actions? 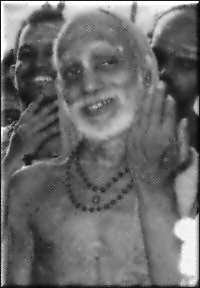 In this mAyic world, the dispenser of the fruits for all our actions is this Ishvara. What fruits go with what actions – is all decided by Ishvara.

Every single action of ours has a consequence and the dispenser of this consequence is the same Ishvara. It is this cycle of actions and the cycle of the fruits of our actions that result in our revolving recurrence of new and newer lives.Only when karma stops may we ever hope to become the karma-less brahman.

What prompts the JIva to be involved in karma is the mind. It is by the prompting and urging of the mind that we do action. So action will stop only if the mind stops. But the mind refuses to stop.

How can a thing destroy itself by itself? Can a gun shoot itself out of existence?

So what the mind can do is only this: In the total agony of anticipation of its own death, it has to keep thinking all the time about the JIva-Brahma-Aikyam that would happen after its (mind’s) death. This is what ‘nidhidhyAsana’ means.

It has to be done with great persistence. The essence of advaita-SAdhanA is this kind of persistent thinking. Of course this is also ‘action’.