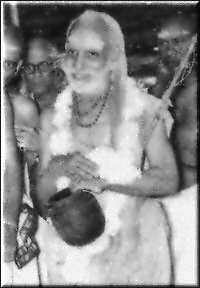 I just now said that all actions are carefully watched by Ishvara and it is He who dispenses the fruits of actions. He also watches this ‘thinking action’, namely the nidhidhyAsana.

When we do this persistently and sincerely, He decides at some point that this person has done the nidhidhyAsana sufficiently enough to destroy his balance of karma and dispenses His Grace that will kill the mind that has been always struggling to establish our individuality that shows this JIva to be distinct from Brahman.

This is the meaning of the statement that by God’s Grace one gets Realisation of Brahman.

That does not mean however that God waits and calculates whether we have done enough SAdhanA to get our karma from all our past lives exhausted. If He does so then that should not be called ‘His Grace’!

A mechanical calculation like a trader to balance the positive and negative side of our work does not deserve the name of Grace. Love, sympathy, compassion, forgiving and allowing for marginal errors – only these will constitute what is termed as Grace, or ‘anugraha’.

The word ‘anugraha’ may also be interpreted as follows. The prefix ‘anu’ stands for concordance or conformity; also continuance. The word ‘graha’ connotes a catching up. When we try to catch up with the Lord by following or conforming with His attributeless nature, by the same principle of conformity He comes and catches us up. That is ‘anugraha’.

The mind of us, instead of being steadfast in its work of ‘catching up’ with the Lord, may also run away from Him. Even then the Lord’s Grace follows us and makes us ‘catch up’. That is ‘anugraha’.