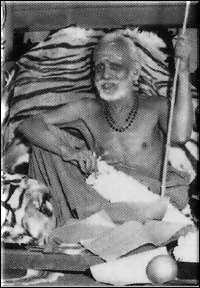 If we do not reach the "luggage" of namaskara to its destined place, namely Narayana, "He" will give us the "wages" for our crime. Like the coolie feeling the weight of the load on him, we have also to feel the weight of the namaskara and not treat it as an honour done to us.

Out of our love for our bhakthas, the weight has to be carried gladly, though temporarily, until it is reached to Him. Even temporarily when it is carried, it is no doubt a weight. But if it is also appropriated, it becomes a permanent big weight of sin on us.

The predicament of the person to whom namaskara is performed is fraught with such risk!

On the other hand, the case of the person performing the namaskara appears a blessed state. Blessed in which sense? When he lowers his body and prostrates before another person whom he considers a saint, he also "pushes" a load off his mind as it were, in the belief that the other person will take care of that.

Namaha is sometimes itself interpreted as the meaning of "Na Mama" (not mine") – that is pushing away something as "not mine". A true namaskara will always be in this attitude only.

Most people do not perform such true namaskaras. As I said earlier, there are cent per cent and pass mark types. Even in a pass-mark namaskara, at least for that fraction of the moment during the actual performing of the namaskara, he feels a relief. This is what we notice daily.