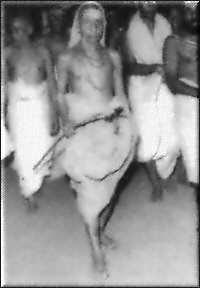 Ayana means path (marga). Ayana also means the end (goal) of the path. In both these senses, Narayana is the Ayana for the Nara (Jivatma).

Bhrama Vidya Sastra gives the path to salvation. Narayana is Bhrama Vidya. When He appears as Krishna Paramatma, he himself says "Adhyatma Vidya Vidhyanam" in the Gita. The final goal of that Vidya is also He only. Therefore it is that when Bhrahma Vidua Guru Parampara is talked about, it starts with "Narayanam".

So it is quite appropriate that in the Bhashya books, which are Bhrahma Vidya Sastras, the Narayana name is used.

The name Sankara joining with the name Narayana has given rise to a name Sankaranarayanan. In south Pandya country, there is a place where the worshipped image (murthy) is the image of Siva and Vishnu in one body showing their oneness. That image is known as Sankaranarayanan.

The place is called Sankaranarayanan Koil. This is now commonly pronounced as Sankaranainar Koil in usage.The Acharya himself has used the above name in an important context.

He has bequeathed to us in a question – answer form a text called "Prasnottara Ratna Malika". In the penultimate sloka of this work, the question is: Who is called Bhagwan and Maheswara.

Our Acharya does not in reply give the names of Siva or Vishnu. Our Advaita Acharya gives the reply as the one Atma which is a communion of Siva and Vishnu. Even there he does not use Siva – Vishnu or Hari – Hara but has used Sankaranarayanan.