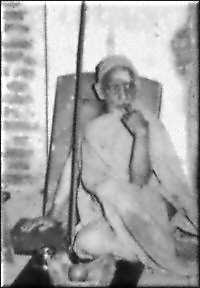 Who is this God (Ishvara) that is bestowing this Grace on us?

JIvas and the universe are just a show of mAyA, but even in that ‘show’ there is a lot of regularity. It is not a haphazard mad show; it is a well-enacted play.

The mind, which is a part of this ‘play’ may be weird in its ways of dancing hither and thither, but the entire universe of the Sun and stars down to the smallest paramAnu’s vibration within the atom, are all happening with a fantastic regularity.

Even this mind has been stilled to silence by our great men and they have chalked out ways for us in terms of what they called Dharma , to follow their footsteps and still our minds. Further, there are thousand other things which happen according to the rules of cause and effect that our ancestors have discovered and left as a heritage for us.

The affairs of this universe are happening in spite of us according to some schedule chalked out for them so that we may live in peace.

If we observe all this carefully, maybe from the absolute point of view everything is a MAyA but in the mundane world of daily parlance, there is an admirable order that must have been initiated or chalked out by a very powerful force, far more powerful than all the powers that we know.

That power is what is called Ishvara (God).