Basic Knowledge of Advaita - Part 2 of 6 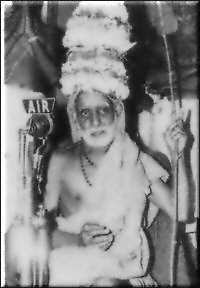 The same Acharya, who has said in works of Jnana like Viveka Chudamani that “Only he who renounces all his karma regimen, takes Sannyasa and enquires into the Atman does justice to this human birth, all others have killed their Atman; in other words they are dead even though living” – the same Acharya now says that man has to do only his bounden karma, otherwise he is ‘dead even while living’.

This shows that this work has been aimed at an audience of average people.

Again, to the question ‘By what is a man free from unhappiness?’, the reply is given: ‘By an obedient wife’ (Verse 31); ‘Who is the friend?’ – ‘Wife’ (Verse 49); again to the question ‘Who is a true friend? The reply goes ‘certainly the wife’. All these show that he keeps as his audience the householders who are living in the grahasthashrama.

But even in such works the Acharya does not avoid things that pertain to the Atman. And he has done it very artistically.

What I mean is, whenever he talks about the situation of the JnAni and his state of mind, he subtly indicates “This is not for you. You need not be right away like this. This applies to only those who have fully taken up the Atma-SAdhanA”, though he is actually describing the lakshana (characteristic) that pertains wholly to a jnani.

When he talks about generalities applicable to all, he just carries on his teaching without delineating any characteristic behaviour.

An example will help the understanding.
(For instance) Right in the beginning he talks formally about the Guru – of course, in the style of question and answer. Then (verse 3) the first question itself is *tvaritaM kiM kartavyaM vidushhAM*. It means ‘What should the knowing ones do immediately?’ Mark the word ‘knowing ones’ here. ‘VidvAn’ means a scholar, a person who knows. The plural of this is ‘vidvAmsaH’. The genitive case of this is ‘vidushhAM’.

The question raised is: ‘What is the immediate work of the knowing ones?’. The question is not about the common man. It is only about the higher level ‘knowing ones’. What is it that they should do with a sense of urgency? This is the question. The reply comes: *santatic-chedaH* -- ‘to cut asunder the chain of samsAra’.

In other words, it means to obtain the release from the repetitive deaths (and births). Thus the path to moksha should be recalled even right at the beginning to the common man – this view of the Acharya is implicit here. However the urgency about it is not for the common man, it is for the ‘knowing ones’.