The matter of Bhakti Yoga 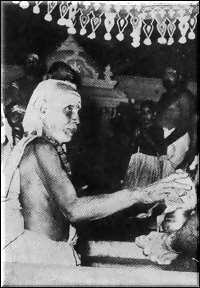 Why did they not make one more classification, namely, those who qualify for bhakti? This is because, both the karma yogi and the jnAna yogi need to have bhakti. In both the classes, bhakti is an important part and both have to do it. That is why it was not separated into a class by itself.

Just as we use the word bhakti-shraddhA, in bhakti also there are two such levels! – as we have two levels of courses in Shorthand and Typewriting!

The lower level – karma pathfinder does bhakti in order to recognise the thought that there is an Ishvara above us who watches us and gives punishment. He should then progress in the same level and continue to do bhakti now to focus the mind through Love.

A further progress – still in the same ‘lower’ level, not ‘higher’ – would make him carry on bhakti with the attitude of surrender of all fruits of action. And now at the higher level, the jnana pathfinder does his bhakti with the thought: ‘The Brahman or the Atman for which I am doing my SAdhanA, it is the same brahman that, in its saguna, is the Ishvara; it is that Ishvara who has granted me the taste in this path and it is only by His Grace that I should obtain siddhi (success).

Above this -- above or below, higher or lower, none of which is applicable now – is the bhakti of those ‘siddhas’ who have reached that experiential stage (of Brahman Realisation). For them there is no reason why they do bhakti, says Sukacharya , one such realised soul. (Shrimad Bhagavatam I – 7 – 10).

Thus, at all levels, there is bhakti in both karma and jnAna; that is why bhakti is not separately mentioned.