Basic Knowledge of Advaita - Part 3 of 6 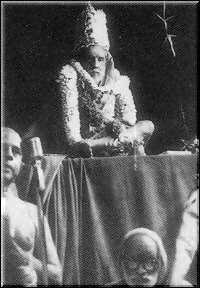 Later one meets with the question: *kasmAt udvegaH syAt?* (Shloka 19) -- Of what should one tremble? The word ‘udvega’ means trembling or fearing. That is the direct meaning.

Nowadays many use ‘udvegam’ to denote an excessive haste or a speed of action sparked by a motive or urge. That is wrong. ‘udvegam’ means just ‘trembling’ or ‘fearing’.

The question is: “What deserves to be feared?”. The reply comes: *samsAra araNyataH sudhiyaH* -- he says it is the forest of samsara that has to be feared. And when saying this he characterises it by adding the word ‘sudhiyaH’. This means ‘those with higher knowledge’.

In other words what is implied is that only the people who are qualified for the higher knowledge think of samsara as a thing to be feared as a dangerous forest and so they should get out of it and obtain sannyAsa. The common man should just know that this will be the response of the man with higher knowledge and that is why this question and this answer.

The ‘knower’ scholar should break off from the samsara; the man with higher intelligence (sudhIH) should fear the forest of samsara – an average man like us should be aware of such things. Not only that. The Acharya has said one more thing that all of us should do; and that he says in an interesting manner.

*kiM samsAre sAraM* (Verse 5) is the question: What is the essence of samsara?

The answer is given: *bahusho’pi vicintyamAnaM idaM eva* -- “to keep thinking of this again and again”.

“Just now you asked: ‘What stuff is there in samsara?’ –that is what you have to ask again and again and keep thinking of.

The objective of this birth is to ask oneself repeatedly whether there is any fruit for this birth and keep enquiring about it. That is what he means by *idam eva bahusho’pi vicintyamAnaM*’’