Basic Knowledge of Advaita - Part 5 of 6 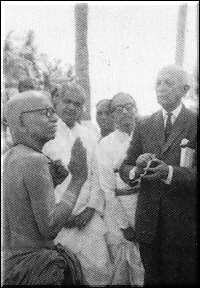 In this work he gives a step-by-step procedure for us ordinary people to start from the rock bottom starting point and go all the way to that peak stage of Brahman-illumination.The beginning is

“Daily practise the recitation of the vedas and perform the karmas prescribed therein”.

So obviously all this is for those who are to proceed by the karma path. But in the very same teaching it says: “Nurture the taste for the Atman! Get out from the household! Get the mahavakya upadesha from the Guru!” and then finally “Settle yourself in the Absolute Brahman”.

Naturally the Acharya means that even those who are at present qualified only for karma should be aware of subjects connected with jnAna-yoga.

Bhagavan (Krishna) also thought in the same way. He classifed Arjuna only as suited for Karma. All of us know the familiar ‘karmany-eva adhikAras-te’ teaching. He brought back to the battle that Arjuna who was ready to run away from the battlefield saying he would not fight.

But even in that very Gita which constituted that advice, he has not stopped with karma yoga but has elaborated about jnAna yoga in detail. Right in the beginning it begins only with Sankhya yoga in all its abstractness.

[And the Swamigal adds with a smile] : All this is ‘justification’ for me (and my talk)!