Basic Knowledge of Advaita - Part 1 of 6 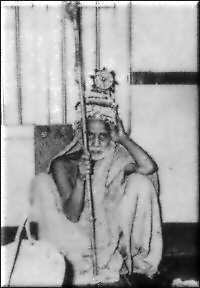 I happen to hold his name. So I have the duty to tell every one about the advaita siddhanta that he propagated so meticulously. That is why I began to talk on this topic.

Usually I don’t talk on this. Because there is too much talk about advaita from every quarter and mostly it all ends up in talk and nothing in execution; and in the process, every one has a false feeling that they have become advaitins by just talking!. And I did not want to add to this talk and add to the Illusion of the general run of people.

But recently, there was a jayanthi celebration here [referring to the Shankara Jayanti celebrations at Tondiarpet, Chennai in 1965] and also a vidvat-sadas (symposium by scholars).

Some persons came to me and requested: “ Why can’t we be taught some advaita?”. So I thought, in the name of the position I hold as an advaita-guru, I ought at least to tell people about what the requirements are for advaita SAdhanA and what the restrictions are therein.

Those who so requested me are also here; so without further postponement, I am now beginning.

I was telling you how from his elementary treatise entitled ‘Bala-bodham’, we can easily conclude that the Acharya holds the view that every one should have the thought about the Atman and should know about the basics of advaita shAstra.

Another of his prakaranams for the general public is called “Prashnottara-ratna-mAlikA”. This is also written for the average householder. It is in the form of Questions and answers. ‘Prashna’ means question and ‘Uttara’ means reply. The two are combined in a raga-malika fashion and called prashna-uttara-malika.

‘Who is dead even while living?’ is one such question. *ko hatah*. The reply is: *kriyA brashhTaH*, that is, the one who avoids doing the karma that is his due.