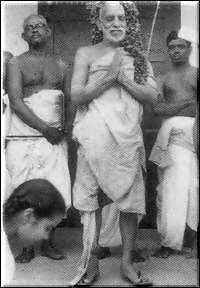 If his mind gets concerned with the welfare of a number of people in this fashion, what happens to his Ashrama Dharma, which demands that Atma Vichara be his only work.

So, when a namaskara is performed to a true sannyasi, he remembers his own Atma Swarupa in Narayana aspect – the Dwaita Loka Nirvaha aspect – and transfers the person's good and bad to Him almost as if saying that it is all your (Narayana's) concern: and severs further contact with that.

That is how it should be in the case of a true or cent per cent sannyasi. But in everything, there are good, bad and indifferent types.

There are people like us who cannot be called true or hundred percent sannyasis but who may be called half – sannyasis (Swamiji goes into irrepressible peals of laughter while saying this…and then reflectively) even half may be too much...it will be fifty percent…let us use the word pass mark sannyasi…

So, can pass-mark sannyasis, like us, act the same way, namely, when one performs namaskara to us, think that they have nothing to do with that and transfer it to Narayana and forget?