The running race between Ishvara & Jeeva 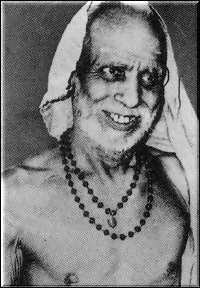 It is actually a running race between Ishvara and the JIva. The JIva tries to catch up with Ishvara. But Ishvara thinks it unfair to grant the Realisation of Brahman to this JIva ‘who has so much balance of karma’.

And the JIva having failed to catch up gives up the attempt and allows itself to be carried away by all worldly distractions. That is the time when Ishvara follows him with compassion and makes the ‘catching-up’ possible. But this compassionate easing up is done in a subtle way.

It turns the mind towards spiritual matters; that is what it means for Ishvara to ‘catch up’. At the same time it is done so gradually that the full ‘catching up’ of the JIva with Ishvara does not happen before the time for it is due. To that extent Ishvara ‘slips’ away.

But that itself makes the JIva fall headlong into the bottomless pit of sin and again the compassionate grip of Ishvara tightens. This tightening and loosening goes on and on until the JIva fills up its mind fully with Ishvara and nothing else. And that is the time for the consummation of the ‘anugraha’.

The Lord is called ‘karma-phala-dAtA’ – the dispenser of the fruits of actions. Like the decision of a judge He has every right to be very strict in His dispensation of justice. When He does so, we have no right to fault Him for His strictness. But He does not do it that way.

He very often condones our failings with His supreme compassion. He is neither too strict nor too lenient in His dispensation of justice. When the supreme-most status is granted to us it is not fair to expect Him to grant it without any concern whether the grantee deserves it well enough.

Justice may be tempered by mercy but it cannot go to the extent of denial of justice. In all these, it does not stop with just doling out the punishment for the karma done. It is in fact supplemented by the process of destruction of all pending karma, end of the mind and finally the benefit of Brahman-realisation.

With such a prospect, the condoning or forgiving nature of Ishvara cannot be expected to go too far!