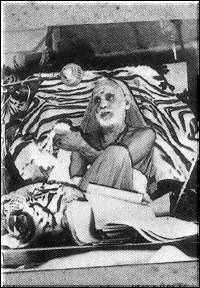 What would be the relationship between JIvAtmA and ParamAtmA?

This is an important question raised and answered by each of the schools in its own distinct way.

One school says that the JIvAtmA will always be distinct from the ParamAtmA; and in that state of moksha, the JIvAtmA would enjoy infinite bliss by worshipping the ParamAtmA with Bhakti – that is the Dvaita conclusion.

Another says: Even though the JIvAtmA will be a separate soul doing Bhakti towards ParamAtmA, it will have the feeling of the ParamAtmA immanent in it as its soul; this is Vishishtadvaita.

Still another says: When the Sun rises the stars do not lose their existence; they just disappear from view, because of the luminosity of the Sun; so also in moksha, the JIvAtmA, though it does not lose its existence, will have its own little consciousness submerged in the Absolute Consciousness of the ParamAtmA – this is the doctrine of Shaiva-siddhanta.

The school of philosophy propagated by Adi Shankara Bhagavat-pada is called Advaita. It says something totally different from all the above.

There is no such thing as ‘this world’; it is only mAyA. Moksha is not a place or a world. When the Atma is released from the bondage of the mind, that is moksha. It may be right here and now.