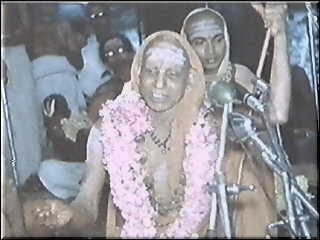 There is another kind of classification.

Mind and the five senses of perception (*jnAnendriyas*) only are together counted as six.

In the Gita the Lord says *indriyANAM manashchAsmi* (X -22). More specifically, he says in XV – 7, *manaH shhashhTAnIndriyANi* -- ‘the six indriyas including the mind’.

There are contexts where the Acharya also has the same opinion. For instance, the indriyas are sometimes called ‘karaNas’ (instruments); because, it is the instrument which implements the actions that fulfill the will of the jIva.

On the other hand, the actions of thinking, planning, enjoying happiness and sorrow -- these are done by the mind which is within. So mind is called ‘antaH-karaNaM’.

Along with the five ‘karaNas’ that do work outside, the Acharya visualises that sextad as a bee and says in Soundaryalahari (#90) *majjIvaH karaNa-charaNaH shhaT-charaNatAM*. The bee has six feet and so the JIva with its six indriyas (‘karaNas’) is taken as a bee.

All movement is with the help of the legs. In life, all the movements of the jIva take place because of these six ‘karaNas’; so they are as good as ‘legs’ for the jIva-bee! This is the ‘karaNa charaNa’ of the shloka.

That is when the mind and the pair of five indriyas are calmed down and the JIva with shama and dama achieved, is immersed in the Absolute. Mother Goddess (ambaaL) has in Her hands a sugarcane bow and five arrows; the bow is to help us with ‘shama’ for mind-control and the arrows are to vanquish the five senses thus helping us achieve ‘dama’.