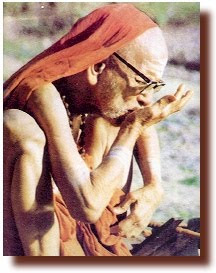 In describing the attributes of a sthita-prajna, He says: “Just as a tortoise draws its head into the shell whenever there is danger, a human being should withdraw his senses from the sense objects into himself” and thus emphasizes the need for sense-control, by giving this beautiful analogy.

Whenever the senses go outward helter-skelter on their own, it is danger time for the human. The tortoise has to draw its head into the shell only when it smells danger; but the human has always to do this withdrawal.

The Lord underscores this fact by using a simple additional word, almost innocuously as it were, namely, the word *sarvashaH* in that verse II – 58.

*sarvashaH* means ‘always and by all means’ ! :

In Brihadaranyaka Upanishad the entire divine community gets the advice: (V – 2 – 1) *dAmyata*, meaning, ‘Keep your senses under control’.

The story goes as follows: Not only the Divines, but the Humans as well as the Asuras – all three species went to PrajApati, their Creator to get advice. They were told by BrahmA only a single letter “da” and were also asked whether they had understood it.

Generally every one knows one’s own weakness. So if somebody tells him a message in a disguised way and asks him to understand what he needed to understand, they will get the message in the way they think it was applicable to them.

To understand something oneself this way has also a greater value. It will stick. One will not find fault with the fault-finder, for the curiosity to decipher the message will win!