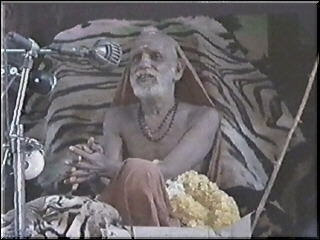 In fact this has raised even some controversy among scholars. Remember I told you earlier that the sextad of qualifications with the exception of shraddhA has been mentioned in Brihadaranyaka Upanishad.

On the other hand, in his prakaraNa work, Viveka-chudamani, he goes with the general trend of meaning. But this need not raise a debate or controversy. He wrote the Bhashyas almost soon after he was initiated into Sannyasa in his youth.

Shama, dama both point to ‘control’ and he might have thought it fit to talk of sense-control first and then only of mind-control. And later when he travelled throughout the country he might have decided to follow the accepted tradition among the scholars.

‘dama’ and ‘shama’ both imply a control on oneself by oneself. So when we generally talk of self-control in an integrated sense of both mind-control and sense-control, we may rightly use either ‘dama’ or ‘shama’ alone. In BrihadaranyakaM when BrahmA teaches the divines generally to be humble, he just says “dAmyata” thus using only the word ‘dama’.