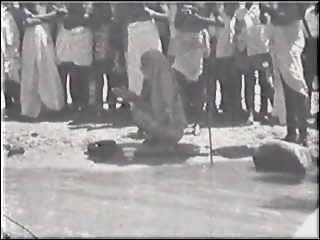 An alternate name for Bharata, the son of Dushyanta and Shakuntala is ‘sarva-damana’, meaning one who controls and reigns over all. It was because of the dominance of her beauty that Damayanti is so called.

The God of Death, Yama, is called ‘shamana’ because he calms away the life of every one, be he a king or a pauper, when the time comes for it.

The word ‘shAnti’ itself connotes a calming down and stands for a peaceful process or state where the intensity of control does not surface.

The eyes and ears can close themselves and stop seeing or hearing. The hands and legs also can be tied so that they are incapable of any action.

But even then the mind will be having its own goings-on without any discipline.

Even though the senses are not experiencing anything, the mind can imagine them and go through all the rumblings and turbulences. When the senses act they act only by the promptings of the mind and for the satisfaction of the mind or fulfillment of the desires of the mind.

So what is necessary is to immobilise the mind in order to stop all the multifarious activities of the senses.