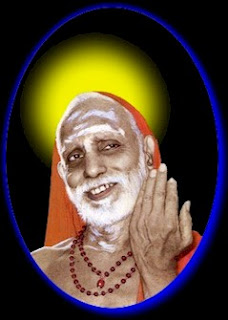 A sannyasi is called ‘yati’. The Tamil name ‘Ethiraj’ is only a mutilated version of ‘Yatiraja’. ‘Yati’ means a Sannyasi.

The direct meaning of the word is one who has the quality of control or one who has controlled. Shri Ramanuja is usually known also as ‘Yatiraja’.

The words ‘yama’ and ‘yata’ both indicate ‘control’ or ‘discipline’. The divine Yama is one who controls every one by fear. He takes them to his locale where they are controlled and punished; so his locale is called ‘samyamanI’.

That matter of Yama pertains to control of others. But the matter of ‘Yati’ is control of the self. So the Shastras such as the Gita talk of such a ‘yati’ as ‘yatAtmA’ or ‘samyatAtmA’.

The forced controls take place in the city of SamyamanI whereas the Sannyasi who has strict self-control is called ‘samyatAtmA’ or ‘samyamI’. Here the control is of the mind and of the senses. In other words he who has acquired ‘shama’ and ‘dama’ is the ‘yati’ or ‘sannyAsi’.

The Lord says (IV – 39) *shraddhAvAn labhate jnAnaM tatparaH samyatendriyaH* -- the one who has, with shraddhA (faith and dedication), controlled all the senses and thus is a ‘samyatendriya’, attains JnAna.

Actually He has symbiotically combined here shraddhA, shama and dama , all three occurring in SAdhanA-chatushhTayaM!