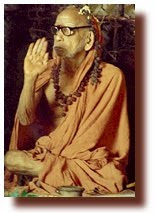 The moral of all this is that even those who have many good qualities do lack the quality of self-control. This is because the attractions of sense-objects have power to draw man into the vortex of MAyA.

So the process of getting out of those attractions can be very difficult. ‘dama and shama’ -- it is not necessary to separate them as two things; even for the divines the control of both the mind and the senses was what was advised – this control is what should be achieved with great effort.

One should not leave off the efforts after a few failed attempts. One should not have a feeling of let-down by defeats in this effort. Trust in God and persistently make the efforts. Keep the practice without losing heart.

Even when the objects in the outside world though perceptible to the ears, the eyes, and the tongue, are not within the reach of these senses, the mind may be thinking all the time about the experiences pertaining to those objects. The control of these thoughts is what is called control of the mind.

It is not at all easy to be achieved. What is to be successfuly attempted at first is, even though the desires in the mind do not vanish, at least in the outer world of activity the indriyas may be restricted not to graze around – in other words, dama (control of the senses of action).

A vrata, a fast, a starving of the eyes from objectionable sights, avoidance of sense-pleasures on certain days – such are the efforts that must be practised with some persistence. This will lead to the mind being trained for the paractice of shama and becoming a little more mature.

When the sense objects are not around, it may be possible to control the mind from thinking about the experiences with them and the mind may remain at rest; but once we come out from that solitude to the outside world, immediately the ears will long for movie music from the radio and the tongue will yearn for that tasty coffee or other drink it used to have.

Thus each indriya, without even the prompting of the mind, will run after its old vAsanA. Independent of the reins the horses now are ready to run!

Now again the ‘weapon’ of ‘dama’ has to be used. Thus controlling the indriyas from running after the external objects, inspite of their availability around, the other weapon of ‘shama’ of the mind has to be applied so that the mind also does not run after them.

Thus the processes of ‘dama’ and ‘shama’ have to be used alternately as well as simultaneously until one is really sure that one has achieved the needed control of both kinds.

The finishing line is of course the total peace that one obtains at the fulfillment of ‘shama’. Thus what can be somehow accomplished is the process of ‘dama’.