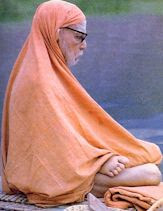 Thus when finally one settles in the Atman, that stage is the next, called ‘uparati’ in the sextad. ‘Uparati’ means stoppage, cessation.
There is a meaning of ‘death’ also. In one of Tayumanavar’s songs (*parAparak-kaNNi* #169) he says ‘mind should learn to die’.That is the stage when mind has reached a no-work state and has calmed down thoroughly.

By the continuous practice of shama and dama, mind has released itself from all the objects outside and remains quiet, without any activity for itself – that is uparati.

That is the definition in Vivekachudamani (#24):

This uparati is mentioned here as the highest (uttamA).

‘bAhyAvalambanaM’ is the hold of the outside. The ‘outside’ does not just mean what is sensed by the senses of perception, like seeing or hearing or moving the hands and legs.

Whatever is ‘outside’ of the Atman, other than the Atman, is all included in the ‘outside’. Indeed all the thoughts that rise in the mind belong to this ‘outside’.

Mind stands thus released from everything. But this word ‘stands’ is almost equivalent to ‘death’ – that is why it is called ‘uparati’. Mind has no action now. But still Atman-realisation is not there.